Robert Sands, is all set. His parents made him a billionaire when they handed him control of their beer and wine company, Constellation Brands, (Cbrands). Years later he’s another retired New Yorker in Delray Beach. I imagine him passing the days with his toes in the sand on the beach behind his $23M faux Georgian Mansion. Despite all Rob’s been handed, he’s willing to commit felonies if there’s another Ashkenazi* who wants a favor.

Two years ago, Digital Realty’s low-life lawyer, Brian Ashe, of the Ashkenazi law firm, Seyfarth LLP, needed just the kind of favor Sands likes to do; firing non-Jewish employees to teach them a lesson about crossing the Ashkenazis. Sands was recruited to a witness in my lawsuit for testifying against Ashkenazi executives at Digital Realty. My witness worked for CBrands as a director for seven years until June 2018. Two months after he testified, he was fired without cause. Why would Sands engage in retaliation against me and my witness? Like any mafia, the Ashkenazi’s operate on favors. Many times these favors violate federal and state laws.

Robert Sands, welcome to my lawsuit.

Of course Sands didn’t act alone: Tom Kane (Kahn), Constellation’s SVP of HR and Kris Carey, Constellation’s Chief Diversity Officer, are also deep in the swamp of corporate coverup. Retaliating against and intimidating a witness in a federal lawsuit is also known as obstruction of justice. The Ashkenazi’s excel at covert crimes such as this one. They’ve been getting away with it for years because they’ve populated our government in key positions at the DOJ, the SEC, etc. It’s the reason Bernie Madoff scheme was allowed to to operate for so long, despite reports to the SEC concerning his Ponzi scheme.

This is how it went down: My witness , I’ll call him George to protect his identity, provided testimony exposing Digital Realty’s general counsel Josh Mills, his assistant, Justin Chang and their lawyer from Seyfarth, Brian T. Ashe. The three were caught fabricating evidence, engaging in perjury and more. See: [ At Digital Realty, Josh Mills and Justin Chang Prove it’s Not Too Late…. to Hate. .Meet the Legal Trolls In My Life.]

When exposed, Mills became furious and looked for ways to retaliate against George and I. Ashe has had investigators poking through our lives and knew that George worked for CBrands. He also knew it would be easy to retaliate because CBrands entire senior team, like Digital Realty’s, are Ashkenazi.

This is generally how they got revenge on George.

Weeks after the illegal termination, George requested his employee file. Cbrands is required by law to provide employee files within 7 days. It took CBrands two months to provide George’s file. HR and legal must have wrestled with how to paper their crimes. In the end, they decided that no evidence is the best evidence. His employee file didn’t contain even a mention of the reason for the termination. It did contain annual reviews as recent as April 2018. Those written reviews heaped praise on George’s contribution to CBrands growth and profits.

It doesn’t surprise anyone that Kane and the Sands are crooks. It’s surprising to see a Thai- American in bed with both men on this crime . After all, she’s Constellation Brands queen of inclusion and diversity, “responsible for leading a Diversity and Inclusion team and shaping and implementing Constellation Brands’ diversity and inclusion strategy,” At the end of the day, Cbrands talk of inclusion and diversity is complete bullshit. The disingenuous Ms. Carey was exposed on June 18, 2018, when she hid in her office with the door closed as a loyal and accomplished employee, who also happens to be gay and a minority, was fired for telling the truth in a lawsuit completely unrelated to his job at Cbrands.

As litigation continues, the public will find out if anyone at Digital Realty or Constellation Brands can find courage to tell the truth and pay try to compensate the victims for their crimes. 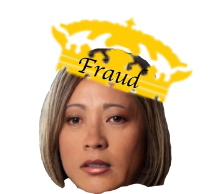 *The majority of Jewish -American Ashkenazi’s are law abiding citizens. Then there’s the rest.